A Story of Mr. Gray, the Water Balloon Incident, and Retrospect Part 2 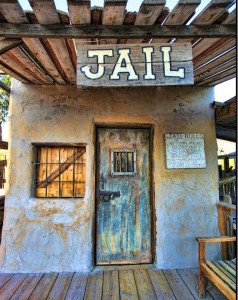 Mr. Haugh was someone with authority over everyone, liked by no one. He was a large man, as wide as he was tall.

And he was quite tall.

Which made him quite wide.

He had fleshy hands, droopy jowls, was mostly bald, and extremely out of shape. The poor man probably hated his job and was at high risk of cardiac arrest but we didn’t think about those things in the 9th grade. We were just scared of him. He was usually scowling except for times like now, when he looked down at us past his ample nose with a grim self satisfied smirk as he turned the key in the detention hall lock.

We were incarcerated. No innocence until proven guilt. Never mind that we had been caught red-handed. Never mind that the school janitor was probably, at that very moment, mopping up bucketfuls of water from the math wing. No trial by a jury of our peers. No nothing. Just instant incarceration.

“There will never be, not today, nor ever, as long as I am assistant principal, a water balloon upon these hallowed premises.” Mr. Haugh had spoken, and his word was law. I was humiliated and mortified that I had to serve detention. Me! I was an “A” student! I was a good kid! I didn’t associate with the usual riff raff that populated the detention hall. And the real kicker: we had been playing with the teachers, for crying out loud, and they all got off Scot free and didn’t come to our rescue!

I was highly indignant at the injustice of it all. I duly served my time but I was incensed. When Mr. Gray assigned that essay I went to town. I needed an outlet for my frustration at the injustice of the system. I told the story of that fateful day: the innocent joy and fun had by all until the squelching of said fun by the heavy and unreasonable hand of Mr. Haw. I thought about referring to him as Mr. Hee-Haw but I decided that might be stepping too far across the line and I didn’t want to be hustled into a covered truck in the middle of the night and never heard from again. I was already nervous about Mr. Gray’s response so I decided I could only push the envelope so far. I knew I could write well and that my essay was grammatically correct, but I was concerned with the content itself. My love for Mr. Gray was unrequited and didn’t extend to actually KNOWING him as a person (and rightly so! Ewww!) so I had no idea how he would respond to my slanderous and scandalous editorial. I couldn’t help it though. My story was crying out to be written and I had no choice but to obey the muse and take the risk.