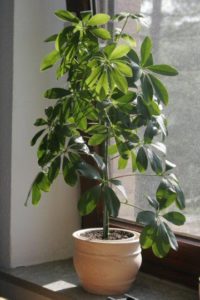 I love house plants. They have to be kept under control, however. You just can’t let them get the upper hand or before you know it you’ll have the Amazon in your living room, and then where will you be? I’m not talking about online shopping here, either.

I had a notable experience with a schefflera some time ago. It was once very civilized, minding its own business in a corner, providing a bit of green relief from the dark black leather furniture we like in our living room. We were very happy together, but one day it overstepped its limits. It had grown to the ceiling, and started trying to throw its weight around. Things got a bit out of hand and I had to serve it a reminder about who’s in charge around here.

I removed it from the center of activity in our home, lest it begin to think itself overly important, and relegated it to a corner of my bedroom. It started to look a bit naked but I’m a benevolent dictator, so I tried to adorn it with some white Christmas lights, in the hope that it might feel better about itself. I was standing on a chair, trying to clothe the thing when it grabbed me and tangled me in its branches. There I was, balanced precariously on a chair, being eaten alive by its upper limbs. The string of lights was innocently standing by, utterly horrified at this chain of events, hanging uselessly in the way during the scuffle, as one does when one is taken by surprise and thrust into a violent situation. I was highly offended, and more than a little annoyed, considering that although I was putting it in its proper pecking order in our home, I was also trying to help it maintain its dignity. But that’s a schefflera for you. Very unpredictable.

In dealing with these situations you have to be prepared for any contingency and when a schefflera turns on you, you have to be ruthless. I was too quick for its grasping branches, and I snapped off the top ones since they were too tall and bending over under the ceiling anyway. Hah! My self defense tactics took it by surprise and I was able to subdue it into submission. I will force it to grow out instead of up! And it will wear the lights whether it likes them or not.

I win, because that’s how I roll.