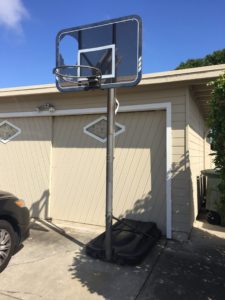 Apparently I am the patron saint of basketball hoops. Who knew?

Over a year ago my son in law mentioned that he’d like to have a basketball hoop so he and some of his friends could shoot some hoops in my driveway. He and my daughter and their kids live in a duplex with no convenient place for a hoop and I agreed that this was a good idea. Shortly thereafter I found a free set up on everyone’s favorite website for used         stuff.

(I would like to just mention as an aside that I have furnished my entire house and patio with stuff I’ve found on this site. I have two disclaimers:

I digress. I grabbed this used basketball hoop online and my son in law collected it and brought it over. He and his friends bought a new net and used it for a couple of weeks until someone hit the ball against the backboard just the right way to punch a hole in it. They taped some cardboard over it for while but it was never the same for obvious reasons, the novelty wore off, and the thing languished in my driveway for over a year becoming a haven for every spider in the neighborhood.

Fast forward to last night: I had grown tired of it in my driveway gathering cobwebs so I took a couple of pictures and joined the ranks of the vintage pink porcelain toilet owners. This morning I actually received a response.

A very pleasant guy came, took it all apart, called it “Awesomesauce!” and hauled it away in his SUV. He even swept my driveway for me, after taking all morning to disassemble it due to it having become rusted and the bolts having seized. He was thrilled with it! I guess he planned to replace the backboard, buy a net, and give it to his ten year old daughter. My loss is his gain. Win, win!

Upon his departure, he patted my arm and said he’d be sure and let his daughter know that I am the patron saint of basketball hoops, and told me to have a good day.

I wonder if he’s picking up some vintage pink toilets next. Maybe he could plant some flowers next to his new basketball court…