In Which I Do Not Wish to Become a Hoarder 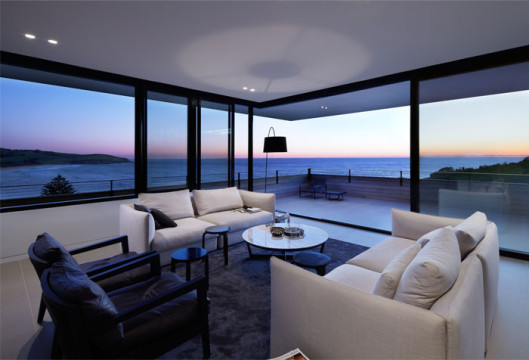 Then I think, “Why would I want to do that…become a minimalist, I mean?” I like my stuff. Sometimes having extras of things that seem useless comes in handy.  Like when the in-laws come to visit and you actually have enough towels without having to dash out to Tar-jay and purchase cheap towels at 11 o’clock the night before they arrive. Granted, they only come once every four years, but you have enough towels when they do finally show up!

But I look at images like this one and I think it looks so relaxing and uncluttered and refreshing and beautiful and my word, that view! I do think those randomly placed stools can go. Did the photographer think they were necessary?

I look around at stuff I haven’t used or needed in years…some of this is stuff I didn’t even remember that I had until it fell out of the top of a closet, and I think I should get rid of most of what I own, coming back around to thinking I should become some kind of minimalist.

First world problem: having too much stuff.

A maxim for living should be, “Don’t have too much stuff.” Or “Your stuff wants to be the boss of you.” Or “Throw it all out, for crying out loud! You haven’t used it in ten years, what makes you think you’ll use it now?!”

Raise your hand if you think arson should be legal. We could all set our own houses on fire and be done with it.

Every time we have moved, we have purged and culled and disposed of a bunch of our stuff.  That would be sixteen times in thirty years of marriage, if anyone is counting.

Each move saw us getting rid of stuff. We consciously dumped at least 50 percent of it all when we moved from England to Spain, and then another 50 percent when we left Spain. Sometimes it seemed like we left behind the wrong 50 percent, but whatever. It’s just stuff. When we moved across the country we unloaded every single stick of furniture we owned except for our mattresses. And the wooden rocking chair my daughter gave me for Christmas one year. Ditto when we came back.

I have lots of thoughts about excess stuff and clutter and how it affects our thinking and our productivity, but I’ll just share a few here because this post is already way too long and I haven’t even reached my point! I am wordy to a fault.

Stuff makes noise. Unpleasant noise.  It shouts at us and berates us, and complains, and distracts us and often causes mental mayhem. It also often fills an emotional need, which is a HUGE subject all by itself,  but my focus at the moment is digital stuff. I have pictures taking up precious memory in my laptop that are duplicates or near duplicates of at least a dozen others. I have documents and writing that I’ve saved over the years that is taking up space. The text documents take up more space in my mind than on my drives, but it’s still space and it’s making noise. As I review some of my previous writing, including many posts on this blog, I see quite a bit of embarrassing and shallow melodrama.

And this post could probably be added to the shallowness, but now I’ve that I’ve written it I might as well post it and at least remain consistent. …And go public about my phobia of becoming a hoarder. Have you seen that show by the way? I’ve seen clips and …wow. Just wow.

So…all this is to say if anyone has any ideas about how to organize digital pictures in a way that specific pics can be reasonably accessed I’m all ears.