A Story of Mr. Gray, the Water Balloon Incident, and Retrospect (Part 1) 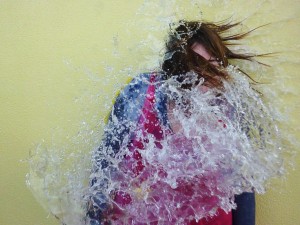 Note: This post is a repeat of one I did on my original blog. If you have read it, thank you for still being here! I did some minor editing but the original content is pretty much intact. I do have new material in the works, but I felt that this one (and a few others that I’ll sprinkle in here and there) deserve a place on my “new and improved” blog.

Some thirty five years ago I was in 9th grade and Mr. Gray was my English teacher. He had a passion for the written word and imparted that to his students. Thus began my love affair with writing. The fact that I was also in love with the young and handsome Mr. Gray had nothing to do with it.

Really. It didn’t. Well…maybe the the tiniest bit at the time, but I must clarify that my current love of language far surpasses my childhood crushes.

He assigned an essay, the requirements of which have long since escaped me, but I clearly remember the essay itself and the events that inspired it.

I wrote a radical and scathing satire defaming one of the administrators of the school. I’m not sure I would have such boldness today, because life has a way of taming the wild beast within. I like to think that these thirty five years have taught me a thing or two about compassion and concern for others. I like to think that I have learned that circumstance and experience mold and form personalities, my own included, for the good and the bad, but at fourteen years old I hadn’t had much in the way of life lessons.

My essay detailed a series of events that began one Friday toward the end of the school year. It was a half day and that afternoon had been set aside for some sort of carnival on the school campus. Most of the staff and all of the students were in a partying mood. Several of my friends and I managed to engage some of the teachers in a spirited water balloon fight.

(Alas, the dashing Mr. Gray was not involved.)

Some of those balloons may or may not have been thrown inside the halls instead of outside on the grass, but we paid no attention to where, exactly, we were aiming and we were having a grand time drenching each other. School spirit, don’t ‘cha know!

Suddenly the sky turned dark and the air grew cold and we kids realized that we were alone. Alone, except for a dark and menacing presence looming on the horizon. Our teacher-accomplices had vaporized into thin air and left us holding the evidence. We were alone to face the dark and menacing wrath of Mr. Haugh.